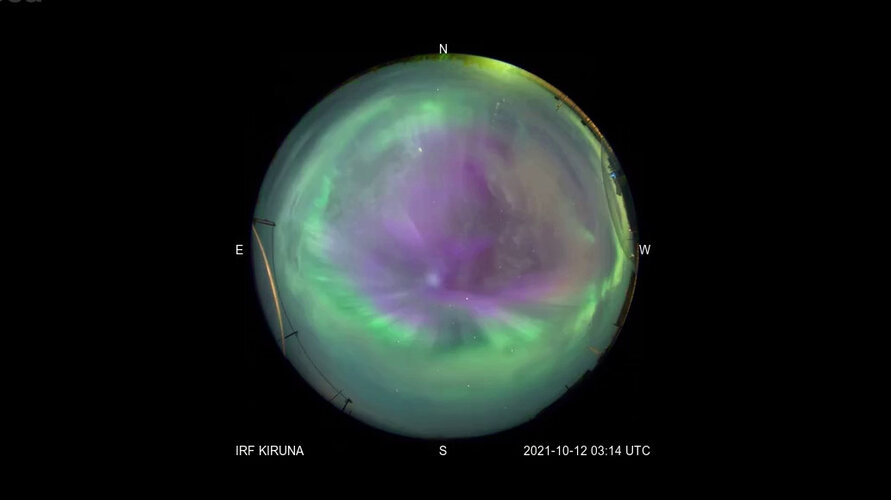 After the Sun ejected a violent mass of fast-moving plasma into space on 9 October, ESA waited for the storm to strike. A few days later, the coronal mass ejection (CME) arrived at Earth, crashing into our planet’s magnetosphere, and lighting up the sky.

CMEs explode from the Sun, rush through the Solar System and while doing so speed up the solar wind – a stream of charged particles continuously released from the Sun’s upper atmosphere.

While most of the solar wind is blocked by Earth’s protective magnetosphere, some charged particles become trapped in Earth’s magnetic field and flow down to the geomagnetic poles, colliding with the upper atmosphere to create the beautiful Aurora.

This stunning video was created from images taken every minute during this recent period of intense auroral activity in the early hours of 12 October, by an all-sky camera in Kiruna, Sweden – part of ESA’s Space Weather Service Network. The goal of such cameras is to view as much as the sky as possible, so they are fitted with a 'fish-eye' lens to see horizon to horizon when pointed straight up.

The video, running in half-speed to accentuate the beautiful auroral motion, starts with a mass of green, swirling structures, created when energetic particles in the solar wind collide with oxygen in Earth’s atmosphere, which then, ‘excited’ gives off light in the green range of the electromagnetic spectrum. This typically occurs at around 120 – 180 kilometres from Earth’s surface.

As we humans have evolved to be very adept at seeing different shades of green, it’s the most predominant colour we see. Harder to see is the purple aurora seen later in the video, this time created as energetic particles strike ‘ionic’ nitrogen in Earth’s atmosphere.

Not just beautiful, such observations are vital to understanding the complex, and sometimes hazardous interactions between the Sun and Earth.

“What I love about this video is the chance to see this beautiful, purple aurora, more clearly visible during intense geomagnetic storms” explains Hannah Laurens, RHEA Space Weather Applications Scientist based at ESOC.

“The movement of this swirly structure in space and time is often referred to as auroral dynamics, and this is very important when studying the relationship between the ionosphere and magnetosphere, linked by lines of magnetic field. The aurora is a manifestation of complex drivers operating in the distant magnetosphere which makes it a useful, and beautiful, tool with which to monitor space weather conditions”.

A beautiful side of something more troubling

The all-sky auroral camera is operated by the Kiruna Atmospheric and Geophysical Observatory (KAGO) within the Swedish Institute of Space Physics (IRF), and data from here is provided as part of the ESA’s network of space weather services within the Agency’s Space Safety Programme.

This is the first auroral display captured by the instrument following its integration into the ESA Space Weather Portal, which provides timely information to anyone affected by the Sun’s outbursts – from airline pilots, to operators of spacecraft and power grids, or even hopeful aurora hunters.

While humans on Earth are protected by Earth’s magnetic field, Space Weather can have an extreme and disruptive impact on satellites in orbit and infrastructure on Earth, and ultimately our society. For this reason, ESA’s Space Weather Service Network continues to monitor our star and the conditions around Earth, to provide information to keep our systems safe.

In 2027, ESA will launch a first-of-its kind mission to monitor the Sun from a unique vantage point. Studying our star from the side, it will provide a stream of data that will warn of potentially hazardous regions before they roll into view from Earth. 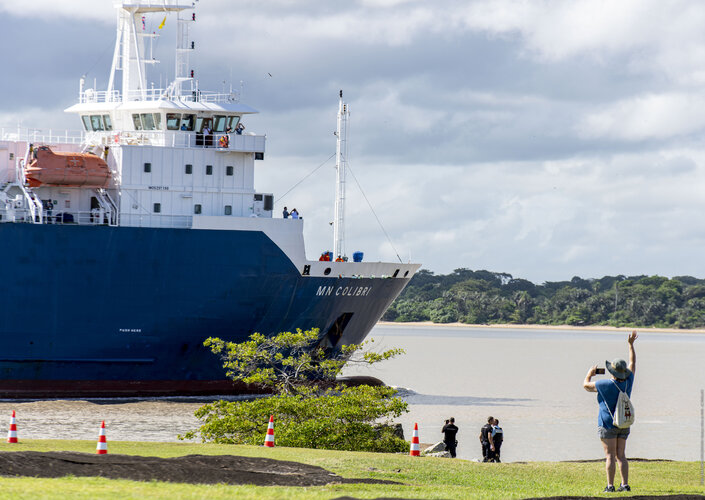 Ariane 6 development: progress on all fronts 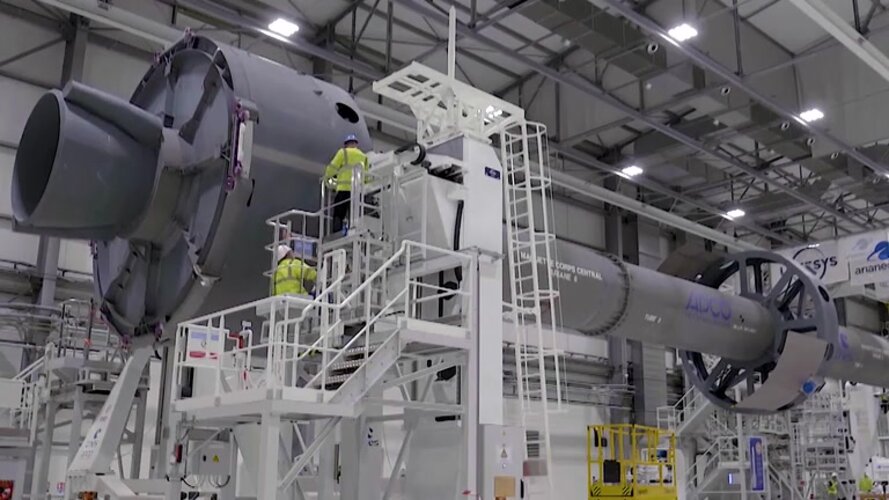 These are exciting days at Europe’s Spaceport in French Guiana and throughout several sites in ESA Member States as the development of Ariane 6 enters its final phase. Ariane 6 parts are being shipped from Europe for combined tests on the new Ariane 6 launch base. These tests rehearse all activities and systems involving the rocket and launch base on an Ariane 6 launch campaign. On the final test, the Ariane 6 core stage will perform a static hot firing while standing on its recently inaugurated launch pad. It will be from this new launch base that ESA’s Ariane 6 rocket will soon be launched for the first time.

Meanwhile in Europe, Ariane 6’s upper stage will experience the conditions of space at a new test bench at the DLR German Aerospace Center in Lampoldshausen. After this, all is ready for the much anticipated first flight of ESA’s new heavy-lift rocket from Europe’s Spaceport.

It includes an interview with : 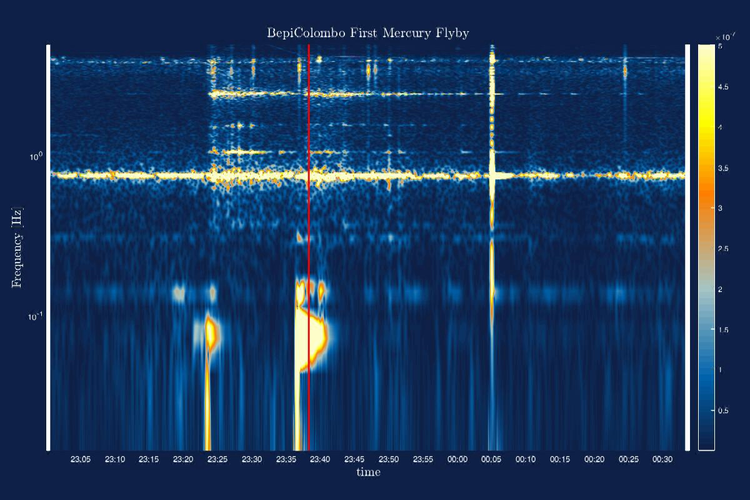 The magnetic and particle environment around Mercury was sampled by BepiColombo for the first time during the mission’s close flyby of the planet at 199 km on 1-2 October 2021, while the huge gravitational pull of the planet was felt by its accelerometers.

The magnetic and accelerometer data have been converted into sound files and presented here for the first time. They capture the ‘sound’ of the solar wind as it bombards a planet close to the Sun, the flexing of the spacecraft as it responded to the change in temperature as it flew from the night to dayside of the planet, and even the sound of a science instrument rotating to its ‘park’ position. 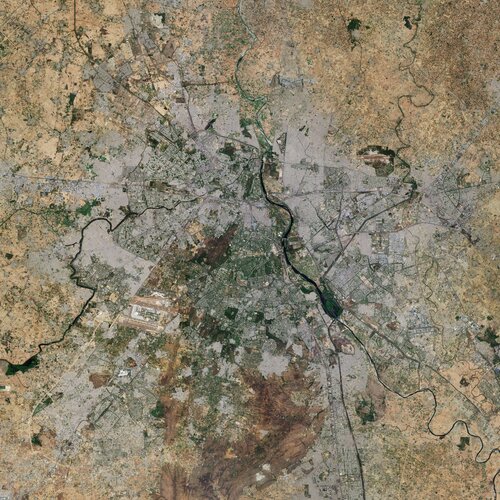 New Delhi, the capital and second-largest city of India, is featured in this image captured by the Copernicus Sentinel-2 mission.

NGC 289: Swirl in the Southern Sky

A mere seven hundred light years from Earth, toward the constellation

It may look like a huge cosmic question mark, but the big question really is

What makes a meteor a fireball?

Juno Flyby of Ganymede and Jupiter

What would it be like to fly over the